Fighting between dogs is a very tense experience, and the larger the dog, the scarier it is. It is also a dangerous act, as it can cause dogs to get injured in a fight. Therefore, the owner must do everything in his power to prevent quarrels between dogs and to arbitrate promptly in the unlikely event of a quarrel. Here, we will introduce how to distinguish between fighting and play, how to arbitrate, and tips to prevent dogs from fighting each other. 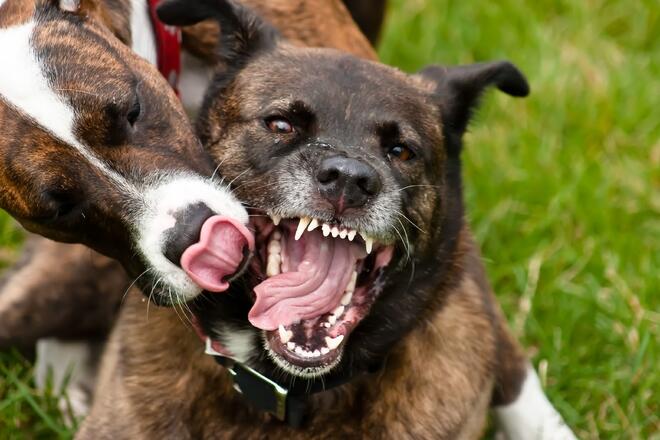 Dog quarrel? The difference between play and seriousness

Dogs can play hard, and for those unfamiliar, play and serious quarrels can be difficult to distinguish. Here, we will explain the behavior when the dog is playing and the behavior when it is seriously fighting.

When the dog is playing

Playing dogs run, jump, and move in a very energetic and cheerful manner. Body language is also unique, and you will be in an unprotected position, such as playing bow or showing your stomach. Also, maybe you’re in a fight when you see them roaring or barking loudly? You may be surprised, but in these cases, you are often playing.

When the dog is in a serious quarrel

When a dog is seriously fighting, it is very tense. Wrinkles the nose and makes a quiet, low growl. Moreover, there is no useless movement and it is very quick. The ears often fall back and the dog’s face is often tense.

The tail of a serious fighting dog is curled up under the belly, and body language clearly shows that the dog isn’t having fun. 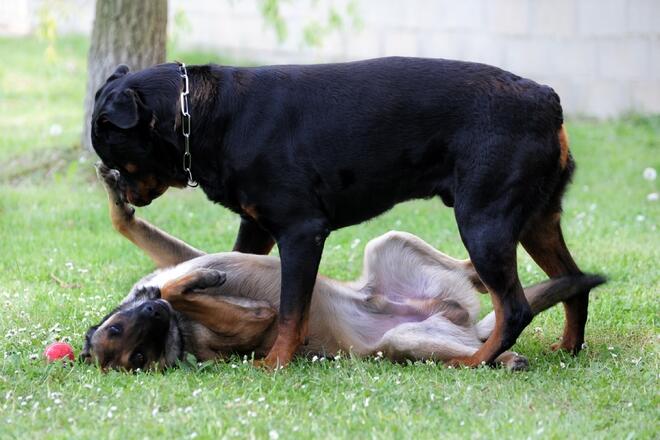 How to arbitrate a fight between dogs

If you fight like dogs, you need to arbitrate immediately. However, the owner may be seriously injured when trying to separate, so make sure you understand the correct arbitration method. Here, we will introduce how to arbitrate a fight between dogs.

Put something between the dogs

The safest way to arbitrate between dogs is to create a barrier with something in between. Try arbitrating the fight by putting cardboard or tree branches between the dogs. In some cases, the fight may be settled by putting a towel on the dog so that the other dog cannot be seen. Also, if there is water nearby, water both dogs’ heads. The dog may be surprised by the water and calm down. 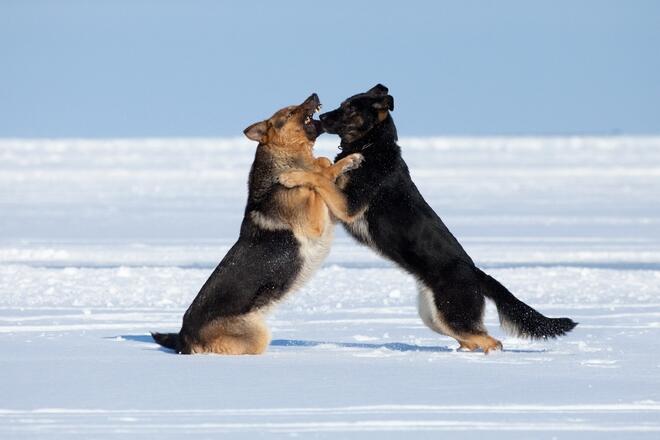 If you put something between the dogs and the quarrel doesn’t stop, you need to force the dogs apart. The important thing here is that two people must pull the dog apart at the same time.

First of all, each owner holds the thigh (the connection between the leg and body) of his dog firmly. And at the same time pull back and pull the dogs apart. When you pull them apart, quickly move the dogs out of sight of each other, and when you’re calm, quickly check for any injuries.

What’s the trick to keeping your dog from fighting?

It’s important to know how to stop a dog quarrel, but it’s best not to let the dog quarrel in the first place. Here are some tips to keep your dog from fighting.

Clean up toys and snacks

Dogs often quarrel because of their defense instinct against toys and treats and their desire for exclusivity. To prevent this kind of quarrel, it is best to put away toys and snacks in places where there are one or more dogs. By pulling out the root of the problem, you can prevent the problem itself. 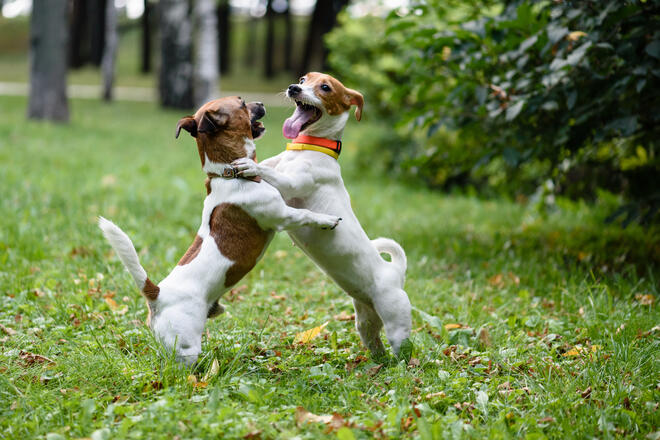 Fights between male dogs that have not been neutered tend to be high. This is not the case for all male dogs, but you can prevent quarrels by understanding the trends and paying special attention to males who have not undergone neutering.

Dogs are just as compatible as humans, and if they aren’t compatible, they can develop into fights. Therefore, the best solution is to avoid dogs that are incompatible with each other. Others just don’t like playing with dogs. If you don’t like other dogs, you can try to avoid them. Meeting dogs that don’t go well with each other is only stressful for the dog.

The most important thing to keep your dog from fighting is to focus on your dog’s body language. It is important to move your dog away from the environment as soon as you feel any change or tension in your dog’s behavior or facial expressions.

It is the owner’s duty to protect his dog from dog-to-dog quarrels and other dangers. Get the right knowledge to protect your dog from fights, and put your dog first in your actions. Also, please value communication with your dog and enjoy a peaceful life with your dog.