The teacup Pomeranian is a hot topic as a very small Pomeranian. Some people may not know what kind of dog it is because it has a short history since it was born. Therefore, this time, we will introduce the body size, personality, and hair characteristics of the Teacup Pomeranian. 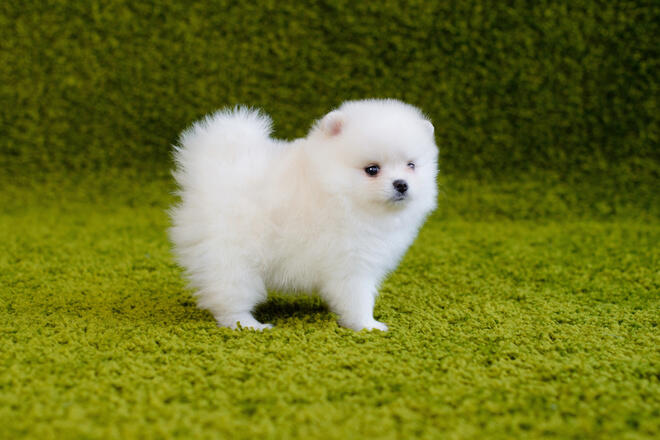 What kind of dog is a teacup Pomeranian?

However, in reality, it is a dog breed with a short history, and the number of dogs is still small. In fact, when you become an adult dog, it can grow to a size that is not much different from the original Pomeranian. In addition, it has been pointed out that ultra-small dogs may have weaknesses and other health concerns, so they are not recognized as official breeds in Japan.

Therefore, be sure to check the health status of the Teacup Pomeranian and information on the parent dog before keeping it.

The teacup Pomeranian is just a miniaturized version of the original Pomeranian, so it is said to have the same personality traits as the Pomeranian. Let’s see what kind of personality it is.

He moves around a lot and is active and loves to play. It’s also bright and friendly, so you can get along with your children.

It is also characterized by being memorable and clever. Therefore, it is said that it is easy to discipline.

Being alert, they may bark in response to strangers or unfamiliar noises. To prevent unnecessary barking, it is important to meet non-family members of the puppy and familiarize yourself with the various sounds outdoors.

Here, we will introduce the properties of teacup Pomeranian hair and hair loss.

The fluffy and soft coat of the Teacup Pomeranian is a double coat (double structure) with upper and lower hair.

With double coat hair, the lower hair that regulates body temperature grows in spring and autumn, so a lot of hair falls off during that time. Leaving hair loss can cause the hair to become entangled and the coat to become less breathable, which can lead to skin disorders. Brush frequently to remove hair loss.

A slicker brush is suitable for removing hair loss. Hold the handle as if you were holding a pencil, and brush along the flow of hair without exerting too much force.

Make sure you have a healthy teacup Pomeranian in advance!

Due to its short history, the number of teacup Pomeranians is limited. In the first place, even the original Pomeranian has large individual differences, so even the teacup Pomeranian may become larger than expected when it becomes an adult dog. Therefore, be sure to visit multiple breeders in advance to listen to information about your dog and also check your health.