The appeal of Standard Poodle is that it shows various expressions depending on the cut style. The standard poodle cut style, also known as the poodle clip, changes its appearance, sometimes elegantly and sometimes cutely. 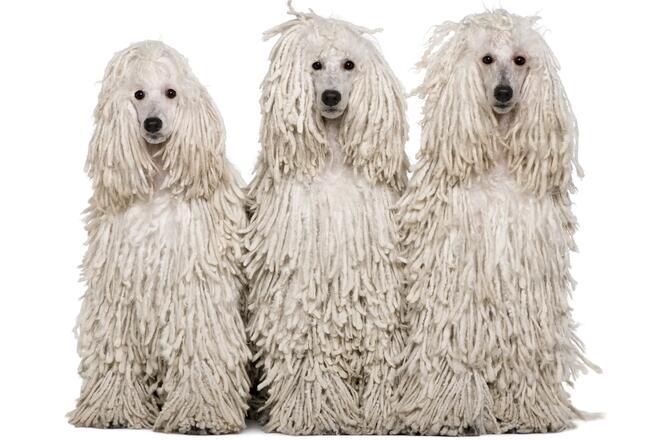 Did you know that such a poodle cut is not just for fashion, it makes sense? In this article, we will introduce the characteristics of Standard Poodle’s hair, why it is necessary to cut it, how to care for it daily, and recommended cutting styles.

The Standard Poodle is also the prototype of the popular toy poodle in Japan and has the oldest history of any poodle species. Originally, it was responsible for swimming and collecting waterfowl shot down by hunters.

Labrador retrievers and golden retrievers are the same recovery dogs, but the major difference between Standard Poodle and retriever breeds is the abundance of hair and the curly coat.

Also, despite having a double coat with a soft undercoat and a curly overcoat, there is less hair loss, which is a big difference from the retriever type. It is a standard poodle with a soft coat that is easy to cut, but it is a major feature that the coat keeps growing for a lifetime. 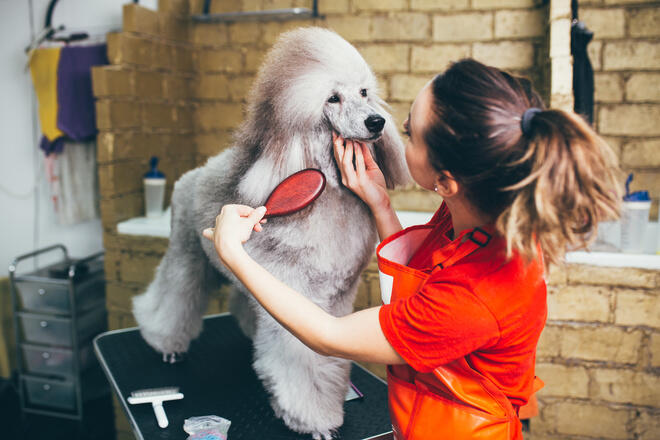 What is the need for a cut for Standard Poodle?

Created to work in the water, the Standard Poodle features a unique poodle clip cut style. This was conceived because the abundant coat becomes heavy and difficult to swim when it gets wet.

The underbody and lower body are cut to make it easier to swim, but the hair is left from the upper body to the head to protect the abdomen and heart from cold water, and the hair is also left on the ankles to keep the joints cool.

In addition, although the hair on the face is cut to the minimum necessary, the hair around the eyes and on the head may be tied to improve visibility.

The cut style that became a mark of the owner

In the hunting competition, many Standard Poodles participate, so it is said that the cut style was changed or only partly colored so that one’s dog could be identified.

The typical cut style is called “Continental Clip”. Another popular cut style is the “English saddle clip,” which uses the back of the head and legs as shortcuts.

Various cut styles depending on the role

Due to its cleverness, training, and athletic ability, Standard Poodle is used not only as a hunting dog but also as a police dog, military dog ​​, and rescue dog.

Another characteristic of Standard Poodle is that the cut style differs depending on the role and place of activity. For working dogs, the mainstream shortcut is to cut the hair evenly and shortly to prevent hairballs, tangles, and dirt from sticking to the hair and not to damage the skin. 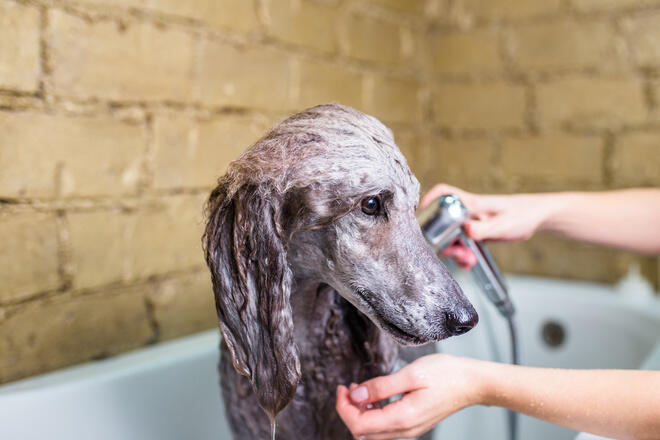 Standard Poodle was active as a water hunting dog and working dog in Germany, but it became a big boom as a part of aristocratic and royal fashion because you can enjoy various cut styles when you go to France. Its popularity is such that it is designated as the national dog of France.

From that time on, fashion-conscious French people made their own cuts and competed for their individuality, which is the origin of various modern cut styles.

Standard Poodle is a breed of dog that needs to be cared for. Daily brushing is essential due to the soft undercoat and curly hair that quickly get tangled. Also, if you leave it alone, it will grow steadily, so you need to shampoo and trim it regularly about once a month.

Be careful not to make pills

The drawback of the soft coat of Standard Poodle is that it is easy for pills to form. If you don’t brush for a day, you’ll quickly get pills.

If left untreated, the pills will become felt-like and difficult to unravel. If that happens, there is no other way but to cut it from the root, so you need to brush frequently to prevent pilling.

Places, where pills are likely to form, are areas such as the base of the back of the ear, armpits, and inner thighs that are easily rubbed. If pills are formed, the skin in that area will be accompanied by pain, and you will be licked by worrying about the pills, and dirt will easily adhere to them, so be careful. 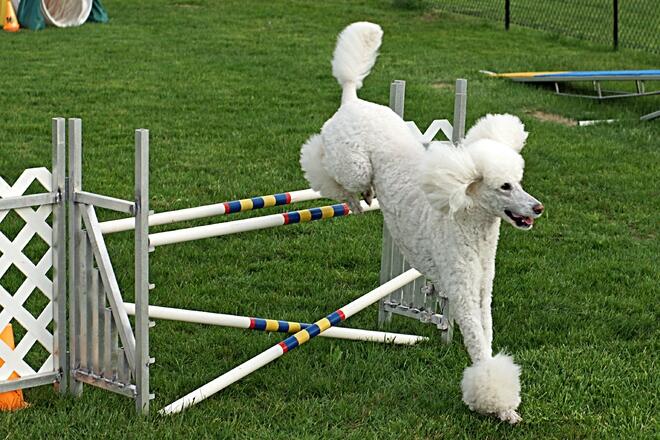 Standard Poodles that participate in dog shows have a set cut style, but domestic dogs can enjoy their favorite cut style. Here, we will introduce popular cut styles.

Many people think of this cut style when they think of Standard Poodle. It is a famous cut style also called lion cut. A classic dog show continental clip is popular as a gorgeous and elegant cut.

Lamb clip is a cut style that finishes like a lamb. The standard poodle cut, with only the face, toes, and base of the tail shortened, is relatively easy to clean.

Afro cut with plenty of volumes

The hair on the entire body is cut short, and the hair on the head is voluminously rounded. There is also a style that puts hair clippers only in the muzzle to prevent dirt around the mouth.

A teddy bear cut that looks like a teddy bear with a rounded finish. It is a popular cut for toy poodles, but the impact of cuteness is great when standard poodles do it.

The easy-care cut that shortens the whole body, also called the Miami cut, is also popular. It is fashionable to cut only the toes long. In addition, the Dutch cut (sports cut), which is popular in the contest, is a cut style in which the whole body is cut short to a uniform length, the head is rounded, and the tail is composed.

Attractive cut style with abundant variations that can produce individuality

Standard Poodle with a lot of hair has no fixed cut style. You can create an original style just by adding a little change to the standard cut. Changing the cut style between summer and winter is also a pleasure unique to Standard Poodle.

Recently, it seems that the number of trimming salons that do not accept standard poodle trimming is increasing because of the large amount of hair and the time it takes to shampoo and cut.

The Standard Poodle is a breed of dog that only shows its charm when it is cut cleanly, so diligent care is essential. If you live with Standard Poodle, you may need to study so that the owner can trim it to some extent.