Do you know a dog called Rottweiler, who is said to have the strength and wisdom to command a cow? Even now, it is a very popular dog breed in Europe and the United States, and it is also active as a working dog such as a police dog. I will introduce the features of such a Rottweiler. 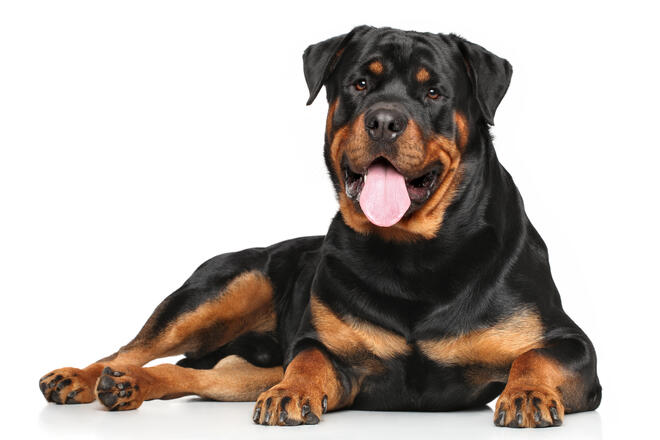 Originally, Rottweiler was named Rottweiler Metsgarfund. However, the word “Metsgarfund” has the meaning of “a dog of a person who kills or slaughtered livestock” for various reasons, and in Germany, the wording is not preferred and it is now called Rottweiler. became.

There are various theories about the ancestors of Rottweilers, but it is said to be a Molossus dog raised by the Romans in BC.

This dog, which is not only smart as a guard dog but also works powerfully, came to be bred as a cattle dog, and after repeated improvements, it became a Rottweiler.

Germany fell in love with its high ability

Rottweilers are said to be the dogs that the Roman army accompanied during the Swiss expedition, but there is a theory that they were not yet named Rottweilers at that time.

In Germany, where he stopped by during this Swiss expedition, his high ability attracted and settled the Germans, and at the same time, with Rottweiler, named after the red tiles for the roof brought in from Rome. It is said to have been named.

Rottweilers have been active as cattle dogs and cart-pulling dogs, but due to the ban on cattle chasing and the modernization of the livestock industry, the role of Rottweilers has gradually decreased and the number of breeding dogs has decreased sharply, and it became extinct around 1900. I was in danger.

However, Rottweiler enthusiasts worked hard to retain their pedigree, and by 1930 they had grown to the point where they participated in the American Kennel Club (AKC) competition. 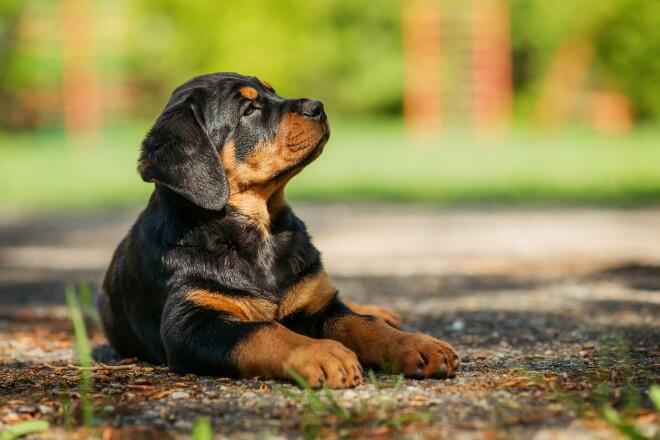 Rottweilers are active not only as military dogs and police dogs but also as mountain rescue dogs, taking advantage of their brave temperament and excellent physical strength. Recently, its wisdom has been bought, and it is expanding its field of activity to customs in each country. Now let’s look at the physical characteristics of Rottweilers.

Rottweilers are relatively compact among large dogs but have a muscular and solid skeleton.

The skull is large and the ears are small drooping ears for the size of the body. It was customary to dock the tail, but in recent years it has gradually become less common.

Rottweiler has only one coat color, with bright red-brown tan markings on the black background near the cheeks, above the eyes, mouth, throat, chest plate, and base of the tail. The size of this tongue varies slightly from individual to individual, but the place where the tongue enters is almost the same.

The coat is short and grows along the skin. The glossy black coat is very beautiful. In addition, since there is little hair loss, it is possible to maintain beauty with only regular brushing and shampoo. 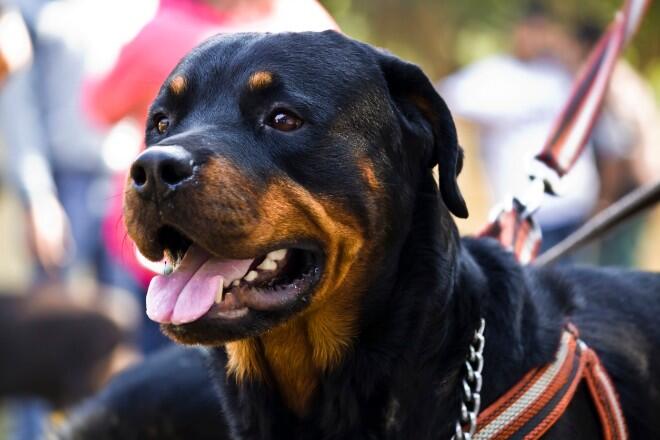 It is said that it is easy to get oncological diseases such as osteosarcoma, lymphoma, and histiocytic sarcoma.

There are also many anterior cruciate ligament injuries, which damage the tissue between the thighs and shins and can make walking difficult when severe.

Rottweilers are only active as military dogs and police dogs, and they are very smart and have a strong sense of caution.

Rottweilers have the wisdom to recognize their strengths, so many individuals have a confident and calm personality. However, this does not mean that it is quiet, but it is an expression of the temperament of being able to stand up to any opponent without fear, and the stronger the person, the calmer it feels.

Good-natured and obedient to the owner

Rottweilers are very loyal to their owners and treat their families gently, honestly, and kindly. However, they are very cautious of non-family members and unfamiliar dogs and may show an aggressive side to protect their families.

It is devoted to the family, so if you train it well, you will be a wonderful partner.

How to grow a Rottweiler

Rottweilers are big and strong, so if you don’t train your puppies well, you may not be able to take a walk. If you are not confident in your discipline, it is recommended that you consult with a specialist such as a dog trainer or trainer from an early stage.

Rottweilers are not only alert, but also very territorially conscious, so they may overreact to strangers’ visits. Therefore, we do not recommend a free-range breeding environment even in your yard.

When excited, it exerts considerable power, so even when mooring, you need to use a sturdy one. Recently, indoor breeding is increasing, but even in the case of indoor breeding, it is recommended to take care so that you can not go out to the front door without permission.

Rottweilers are a very strong breed of dog, so you need to take a walk for an hour or two. If possible, it’s best to do this twice a day.

Sometimes it is recommended to run with a dog run so that stress does not accumulate due to lack of exercise.

Rottweilers say that socialization training as a puppy is especially important.

Adult dogs have the power to compete with adults, so after thorough socialization, it is important to discipline the owner and other people so that they do not have extra caution. It is important.

It’s basically a smart breed, so it’s a good companion to training. However, it can get out of hand if you do it the wrong way or inconsistently.

By gaining various experiences and training properly since you were a puppy, you will become a dog that can properly follow the instructions of its owner and family. Once you’ve done the wrong discipline, it can be quite difficult to correct later, so be sure to study how to discipline before welcoming your puppy.

Rottweilers have short coats and little hair loss, so they are not a breed that requires much daily care. Brush regularly and shampoo occasionally if you think it’s getting dirty.

However, it is easy to get a tumor-type disease, so when brushing, touch the skin with your fingertips as if you were stroking it, and check for something like a tumor.

Rottweilers are scary dogs at first glance, but they are actually very kind and family-friendly. As long as you discipline yourself first, it will give you an obedient and calm impression.

It’s a smart breed, and it’s easy to train, so if you do it the right way, it’s not difficult at all. By training well, please spend a happy time with Rottweiler.