Chinese Crested Dog is a popular breed of hairless dog. The elegant features have long been loved by royalty and aristocrats. We will explain the character and characteristics of the Chinese Crested Dog, breeding environment, etc. 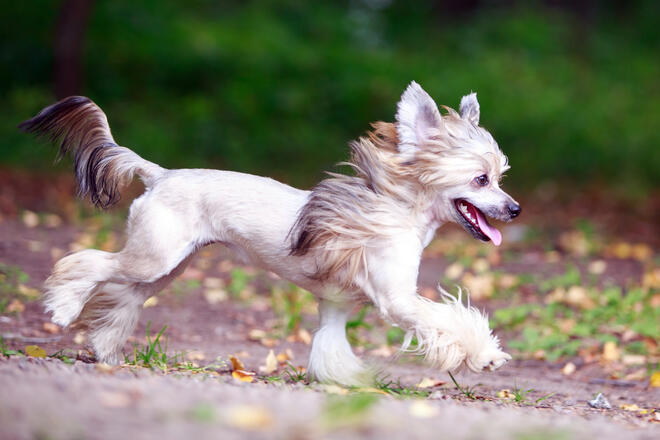 What kind of dog is the Chinese Crested Dog?

It is a dog breed that is not very well known, but I think that you can get a better feel for its charm by knowing its history and characteristics. Let’s dig deeper into the hairless and popular Chinese Crested Dog breed this time!

The predominant theory is that the Chinese Crested Dog is native to the African Sand Dog breed, which is native to Africa.

It is said that this African Sand Dog was bred with various breeds in each country of import, and the dog that went to China became a Chinese Crested Dog. It was once endangered due to the effects of war and other factors, but after that, it was mated all over the world and officially registered with the American Kennel Club in 1991. 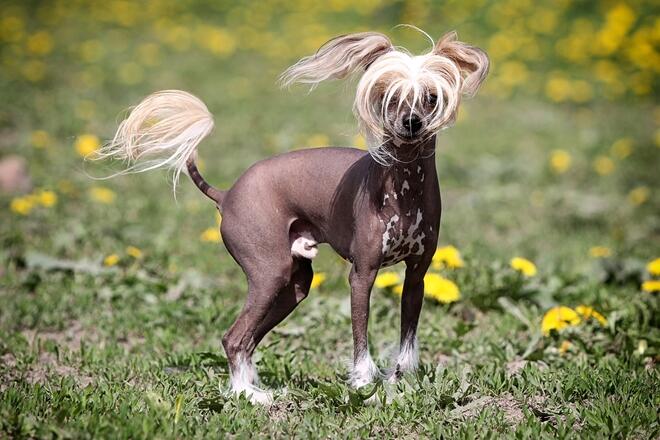 It is said that the dog name Crested is derived from the crest hair (a hairstyle that shaves other than a part of the hair and stretches the remaining hair to make a braid), which is often found in Chinese men’s hairstyles. .. Also, in China, the appearance of the Chinese Crested Dog resembles the legendary animal Kirin, so it is also known as the Kirin dog.

Its appearance is characteristic, with hair growing only on the head and tips of the limbs. Basically, there are many hairless individuals, but there are also individuals called “powder puffs” that have long-haired coats all over their bodies.

The slender body is about 28 to 33 cm for males and about 23 to 30 cm for females. The standard weight for both males and females is 5.5 kg or less, and it is classified as a small dog.

Hairless Chinese Crested dogs often have white coats, and powder puffs with coats all over the body have coat colors such as cream and gray in addition to white.

Since the hair itself is small, there is almost no hair loss, but it is necessary to take care of the exposed skin.

The average life expectancy of a Chinese Crested dog is said to be about 13 to 15 years. Be especially careful of skin disorders such as atopic dermatitis and allergic dermatitis, as the skin is exposed.

Since the limbs are thin and easy to break, if you fall from a high place, you may break your bones. In addition, there is a possibility of limb injuries just by getting off the sofa, so if you make something like a staircase in front of the sofa, you will be able to prevent injuries.

Bright and loyal to the owner

While affectionate to their owners, they can be introverted and a little timid to strangers. It doesn’t take an aggressive attitude, but it’s unlikely that you’ll leave the scene or approach someone you don’t know.

How to Raise a Chinese Crested Dog

Because it is a small dog, it can be bred even if it is not so spacious.

However, since it has less hair, it is vulnerable to heat and cold, so it will be necessary to keep the room temperature constant. Since it is a dog breed that people love, it is not suitable for long-term answering machines. The ideal environment is one in which someone in the family can always stay at home.

As a guide, it is enough to take a walk twice in the morning and evening for 15 minutes each. If you are too busy to go for a walk, just playing with a ball indoors will solve your lack of exercise, but you should take a walk as much as possible to change your mood. Sunburn and dermatitis can occur when exposed to sunlight, so be sure to take a walk during non-sunrise hours.

Chinese Crested Dogs are not very good at being disciplined.

I don’t like being disciplined especially severely, so it’s a good idea to discipline while playing with toys and balls. The ideal discipline is to compliment and stretch. It may be good to start with a simple “sitting” and have people understand that discipline and training is fun.

For hair care, you only need to lightly brush the hair several times a month.

In addition, measures against dry skin are indispensable. Therefore, keep your skin moisturized with a dog moisturizer on a regular basis. You should also be careful about skin diseases caused by sunburn. Take measures such as dressing dogs to prevent sunburn.

You will be able to build a relationship of trust by treating them with affection, rather than scolding them at all. The breeding itself is very easy, so it is a breed that I would like to recommend to those who keep dogs for the first time.