Chin is a small dog native to Japan, and is a breed that fascinates many people with its beautiful straight coat and lovely expression. In ancient times, it was a dog loved by lords, aristocrats, royalty, and the president, and it is also a pet dog with a history of more than 1000 years. Here, we will introduce the Japanese Chin in detail.

It is often thought that it is a dog native to China because it resembles the Chinese character “Japanese Chin” and Pekingese, but it is actually a small pet dog native to Japan. Called Jpanese Chin overseas, it is especially popular in the United Kingdom.

The name “Japanese Chin” is said to be derived from the omission of the word “small dog”, but the details are unknown. The Japanese Chin, which is also the name of the breed of dog, is a Japanese kokuji that is written in the middle of a beast, and is said to have the meaning of being between a dog and a cat because it behaves in a similar size to a cat. I will.

The history loved by Tsunayoshi during the Edo period

The Japanese Chin has an old history that appears in the Nihon Shoki, but its roots are not well understood. It is said that the roots of this small dog are the Tibetan Spaniel breed of Tibet, which came to Japan from China via Korea. There are many unclear points about ancestor dogs, but since entering Japan, it is the oldest improved dog in Japan that has been repeatedly improved and bred as a pet dog. 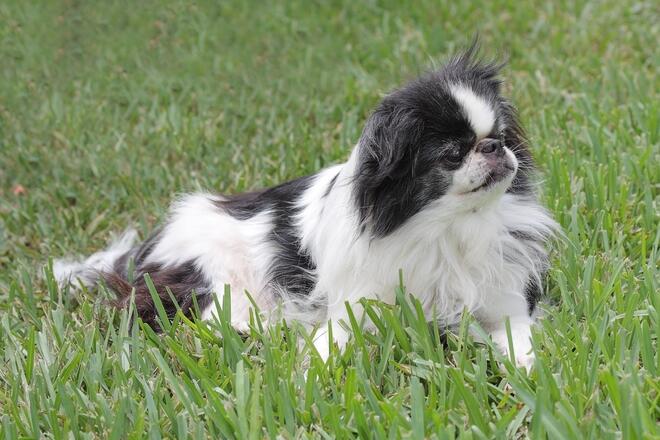 During the Edo period, it was bred as a pet dog by Tsunayoshi Tokugawa, and many breeders existed at that time. The Japanese Chin, which was bred in Edo Castle by Tsunayoshi, a dog lover, lived a luxurious life. From this, the word “Zashiki dog” was born, and the Japanese Chin is also synonymous with the Zashiki dog.

After that, it was brought back to the United States by Perry who came to Japan by Kurofune, and was bred as an upper class pet dog such as President Franklin who was the president of the United States at that time and Perry’s daughter. It is also believed that it landed in England during this period, as there are records that it was presented by President Franklin to Queen Victoria of England. The current Japanese Chin is based on the breeding increase of the dog presented to Queen Victoria.

Characteristics of the size and coat of the Japanese Chin

The Japanese Chin loved by the upper class not only in Japan but also overseas. The crisp big eyes, the rich coat of fluffy hair and the elegant appearance are one of the reasons why it was loved by the common people, especially celebrities. In addition, the cat-like nature of being fond of climbing up and looking down at high places and the loneliness of being fond of people are also attractions that captivate many people. 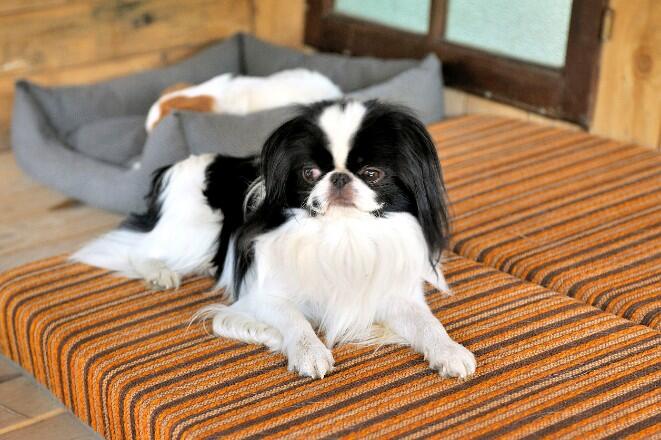 The silky, supple and shiny coat of the Japanese Chin features a fluffy face, small drooping ears, a fluffy feather-like tail and a square body, and short legs. The standard body height is 20 to 28 cm and the weight is 2 to 6 kg.

Characteristics of the coat of the Japanese Chin

For Japanese Chin, which is characterized by a soft and long straight coat, it is preferable that the white base color has black or red spots that are relative to each other from the body and eyes to the entire ear. In addition, three colors, black and brown, are also accepted on a white base. Although it is a beautiful long coat chin, it does not take much time and effort because it is a single coat and there is little hair loss. To keep the beauty, you need to brush once a week and shampoo once a month.

Lifespan of Japanese Chin and illnesses that are likely to occur

The small dog Japanese Chin is a relatively healthy breed.

Diseases that are easily affected include elbow / knee dislocation and hip dysplasia, which are common in small dogs, as well as hypothyroidism, progressive retinal atrophy, cataracts, epilepsy, and heart disease. Many are genetic disorders and can be checked when welcoming a puppy. The life is about 10 to 14 years.

The character of the Japanese Chin

Although he likes high places, has the ability to climb high places, and has a cat-like side such as washing his face, he has a deep affection for his owner and has all the qualities of a companion dog. Here, we will introduce the character of the Japanese Chin in detail.

The Japanese Chin is a breed of dog that is gentle, affectionate, and loves to be with its owner. Another characteristic of the Japanese Chin is that it is the happiest thing to sleep on the lap of someone in the family. Also, if there are delicate points, the owner does not bite you, or the answering machine is long, and you feel that the owner has ignored you, you may become anxious about separation, so be careful. 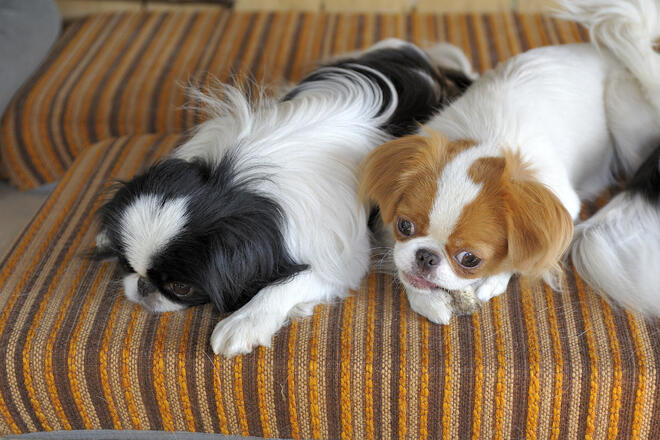 The Japanese Chin, which has been carefully raised as a lord, royal family, and upper class dog, has been improved as a pet dog that can be kept indoors. It can be said that the characteristic of the Japanese Chin, which is gentle and makes people feel joy by healing and entertaining, is the result of repeated improvements. The charm of the Japanese Chin lies not only in its cute appearance and love for people, but also in its wisdom. One of the reasons why Japanese Chin is loved all over the world is the wisdom of understanding people well, the wisdom of feeling, and the sociability and cooperation of being able to get along with anyone.

How to grow Japanese Chin

The Japanese Chin is the first dog native to Japan to be registered with Kennel clubs in the United States and the United Kingdom. It is a short snout with a fluffy nose, and has fans all over the world because of its elegant appearance. It is characterized by a friendly and cheerful personality, but there is a point in how to raise it. Here, we will introduce in detail how to raise Japanese Chin.

A long time ago, the Japanese Chin, which was bred in Edo Castle and Yukaku as a tatami mat dog, was born on the premise of living indoors with people. It has a high ability to adapt to the indoor living environment and can be bred in a small apartment, but care must be taken at room temperature. Since it is a short snout that cannot regulate body temperature, it is not good at the heat of Japan where the humidity and temperature are high. Let’s control the temperature of the room where we live together with an air conditioner. Also, since it often hurt the knee and elbow joints, it is important to lay cushioning flooring materials such as carpets and rugs instead of flooring. Since it is a breed that emphasizes acting with its owner, it is not suitable for environments with many answering machines.

The Japanese Chin is a breed of dog that prefers to sleep on the owner’s lap and play with the owner indoors rather than running around in nature with the owner. Although it plays actively indoors, it is not a breed that requires a lot of exercise. I don’t hate walking, but a 30-minute walk twice a day is enough. Also, since you have a fluffy nose, you may be susceptible to heat stroke, so you need to be careful when taking a long walk in the summer.

Once kept, the Japanese Chin is said to be a breed that is unsatisfactory with other breeds. The reason is that they have a deep affection for their owners, but there are also delicate parts that are constantly sensitive to their actions and words, so care must be taken when keeping them. It’s good to remember because it listens wisely to the owner’s words, but it tends to be prideful and uninterested in finding itself uninteresting. When disciplining, it is recommended to devise a way to make the Japanese Chin interested, and to make it efficient in a short time so that you will not get bored.

The charm of the Japanese Chin is its silky, supple and shiny coat, but it is easy to clean because it has a single coat and firm coat. You can keep your beauty by brushing once a week and shampooing once a month. Also, there is no need for trimming such as cutting. For Japanese Chin, which are often indoors, clean your nails regularly.

Happy time to spend with the Japanese Chin