French poodles, Hungarian water dogs, Portuguese water dogs, Irish water dogs, spaniels, and even Maltese dogs may be the ancestors of the poodle.

But only standard VIPs have the ability to work. It is a smart and understanding dog breed. For many years, it has been considered the national dog of France. According to the size of the poodle, the AKC standard is divided into three types: standard, mini, and toy. The FCI divides them into four types: large, medium, mini, and toy. Poodles have a unique temperament and changeable shapes, which have won the hearts of many people and give people a beautiful and intelligent impression. It is worth noting that there is no dog of the Teddy breed. Teddy is not a dog breed. It is just the name of one of the many beautiful styles of the Poodle.

The top of the skull is slightly rounded, the brow is shallow but clear, and the cheeks are flat. The eyes are dark and oval in color, with a wide distance between the eyes, and the eyes are alert. The kiss is straight and slender, with a slight depression under the eyes. The neck is strong, and the neck is long enough to lift the head high. The chest is deep and swollen with stretched ribs. The back heel is short and perpendicular to the ground. 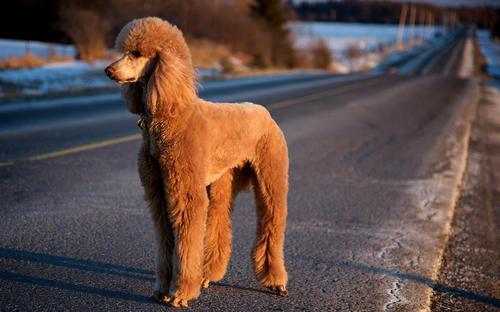 Its coat is usually trimmed into a traditional shape. There are curly and corded coats: curly coats are thick and dense: corded coats are drooping, and the length of the coat varies on various parts of the body. The neck, torso, and head The coat and ears are very long.

How to raise a poodle

Poodle puppies are very easy to get sick, so you should pay special attention to prevention and food hygiene. The food must be rich in protein, and the meat should not be less than 100 grams per day. Before feeding, add the same amount of vegetarian food or biscuits to mix with water, and provide some fresh and clean drinking water. 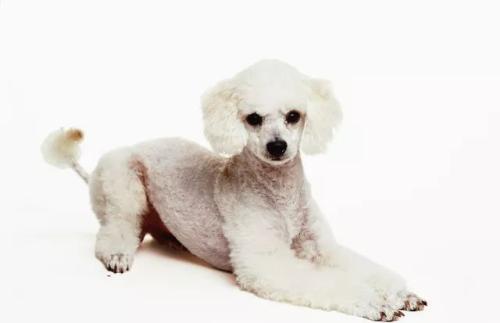 The hair should be combed once in the morning and evening for 5 minutes each time.

Pay attention to the sequence of combing: starting from the neck, from front to back, and from top to bottom in sequence, that is, from the neck to the shoulders, then back, chest, waist, abdomen, hindquarters, and then comb the head, and finally, It is the limbs and tail. During the combing process, you should comb one side before combing the other side.

Combing method: combing hair should be combed and pulled quickly in the direction of the hair. When grooming long-haired dogs, many people only comb the long hair on the surface and ignore the fine hair below. The undercoat of a dog is soft and dense. If it is not combed for a long time, it will form tangles and even cause eczema, tinea, or other skin diseases. Therefore, when combing a long-haired dog, you should comb layer by layer, turn the long hair up, and then comb its undercoat.

The selection of elite breed dogs for mating and breeding will consolidate and develop the excellent qualities of dogs in their offspring, and make people’s undesirable shortcomings gradually disappear in their offspring. This is the purpose of selection.

When male dogs and female dogs of the same breed with the same excellent traits mate and breed, they can not only ensure that the breeds of their offspring are pure, but they can also consolidate and develop the excellent qualities of their parents in their offspring. This kind of mating and breeding is called purebred Reproduction. Use a male dog of a good breed to mate with a female dog of another breed. Because they have different good traits, you can get offspring with different good qualities from the parents. This kind of breeding is called interbreeding. The use of two different species of males and females to mate, bred new breeds or offspring with new traits, this kind of breeding is called mixed hybridization, such as the use of male wolves and excellent female dogs to breed, you can breed fierce enemies A new breed of dog that is docile to the owner.

Animals all have a specific time of sexual maturity, which is not the best age to give birth to offspring, and this is also true of dogs. Take medium-sized dogs as an example. They begin to mature sexually at the age of 7-8 months after birth. Although both male and female dogs have the ability to give birth to offspring, their physical development is not yet sound. At this time, the reproductive offspring are also won’t be too good. For black-backed, wolf-green, Lingti, Kunming dogs, the best age of their offspring for the first time: bitches should start at 18 or 20 months after birth when their bodies are fully developed, Also has the ability to breed suckling dogs, so female dogs should be bred in the third estrus; male dogs develop and stereotype later than female dogs, therefore, the best dog age for the first breeding should start at the age of two. The breeding age of male dogs can be extended from two to seven or eight years old. To obtain excellent offspring of elite breed dogs, the nutrition of male and female dogs must be strengthened before breeding. Pay attention to proper training and exercise for them. Keep their bodies healthy and keep them motivated to work.

The main characteristics of female dogs during estrus:

2. The bitch looks excited during estrus. As the estrus period continued, the bitch’s excitement increased, her expression was more drowsy than usual, her bark was louder, and her eyes brightened. In hot estrus, the bitch sits restlessly and loses appetite sharply. The tied bitch keeps barking in courtship. At this time, if the dog breeder presses the bitch’s waist with his hand or strokes the dog’s tail, the bitch will standstill. , Or tilt the tail of the dog to one side, the dog’s labia is constantly twitching, and the vagina opens and closes frequently. At this time, as with a sexually mature male dog, the hind limbs of the female dog in estrus are spread apart and the dog is actively accepting mating. During the estrus period of the dog, the dog breeder must closely observe the above-mentioned changes and expressions of the estrus bitch, and must remember the date when the bitch begins to estrus (the first day of vaginal bleeding) to calculate the best bitch. The mating day: Only bred on the best mating day can the female dog’s conception rate and litter size be improved.

Feeding and management of pregnant dogs

The pregnancy period of female dogs is 58 to 65 days, with an average of 62 days. Among them, the gestation period of large dogs and medium-sized dogs is about 63 days, and the gestation period of small dogs such as pugs is about 60 days. To ensure that the offspring breeds are pure, in the first few days after mating, the bitch is not allowed to approach the male dogs of other breeds, to avoid impure offspring.

The bitch should be carefully fed during pregnancy, and the feed should be rich in nutrition and sufficient in quantity, allowing it to feed freely. You must also feed some cartilage, fresh green vegetables, cod liver oil, etc. Pregnant dogs must have appropriate activities. Female dogs in the first month of pregnancy can carry out professional training activities every day; from the second month of pregnancy, pregnant dogs should stop training, and are not allowed to jump or participate in professional activities, but every day the owner must take it for a two-hour walk. Improper activity is very harmful to pregnant dogs.