The Plott Hound is a large group of hunting dogs, originated in the United States, originated in the 18th century. The Potter Hound is smart, alert, and confident, with a distinctive hound color. The Potter Hound is traditionally used to deal with large prey. It shows perseverance, patience, agility, decisiveness, and aggressiveness when hunting. In addition to strength and strong muscles, the improved Protter Hound also combines athletic ability and courage. 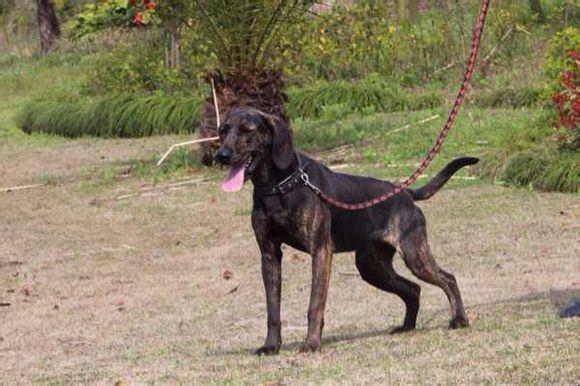 The Potter Hound was the original Coonhound. This large group of dogs has been bred by the Prot family for nearly 250 years. They are used to hunt bears and raccoons in the Appalachian Mountains, Blue Ridge Regions, and the Great Smoky Mountains in the eastern United States. Unlike the loud calls of other coonhounds, the Protter Hound has a strange, sharp call.

Lean bones and strong muscles ensure that they can work around the clock. They like to devour a lot of food, which will inevitably suffer from fatal stomach twists. Outside the southern states of the United States, it is difficult to see this kind of dog. And they are rarely raised as a companion alone.

In 1750, 16-year-old Johannes GeorgPlott bought five detective dogs (Schweisshunds) from Germany and brought them back to his new home in the Great Smoky Mountains. Facts have proved that these dogs and their offspring are great experts in the cold search of big animals, especially bears. In the early 20th century, it was crossed with other dogs to improve the quality of Plotter dogs.

This time this breed introduced a black saddle tabby dog. Although they are mainly used to hunt bears, wild boars, and cougars, many Plotter dogs are also good at catching raccoons up to trees. There are far more raccoon hunters than bear hunters, and it is found that this kind of dog is too in need of them.

In 1946, the United Kennel Club recognized this dog breed, so it has its own official name “Protter Hound”. In 2007, the AKC recognized the Protégé dog and placed it in the hunting dog group.

Proportion: The ratio of normal structure to height.

Defects: Legs are too long or too close to the ground.

Weight: (under the condition that you can participate in hunting) 50-60 pounds for males and 40-55 pounds for females.

Defect: Exaggeration. A skeleton that is too heavy or too embodying speed and dexterity.

Defects: The skin has folds, lapels, and the skin is too tight.

Eyes: brown or hazel, prominent rather than sunken.

Male ears spread out 18-20 inches. Females are 17-19 inches. When attentive or curious, some Prot’s ears will have a half-pricked force and will form a clear crease in the crown. Disqualification: The ears are longer than the tip of the nose or hang like a blood dog, long, drooping.

The crown is round and the space above the eyes is quite wide.

Mouth: The length is moderate, and the vertical lips are somewhat square in appearance.

Defect: square. There are pointed.

Color: The eye frame, lips, and nose are black. The falling lips are black.

Bite: The teeth are scissors.

From dark brown to a golden brown. When there is some gray effect around the jaw and mouth, some white on the chest and feet is fine.

Plotter dogs are helpful, loyal, and brave, but also self-willed and independent. They are wary of strangers, but they usually get acquainted with people quickly. They do not live in groups with other dogs like some hunting dogs.

Plotter dogs need to walk long distances or go out every day. They like to swim and brush their hair every week.

Mainly distributed in the United States.