The Golden Retriever is the most popular large dog in the world. Due to his clever, gentle, and gentle personality, he is popular not only as a domestic dog but also as a working dog such as a therapy dog. The weak point of such a golden retriever is actually hair loss. Full of hair throughout the house during the molting period! Also the situation. This time, I will explain why Golden Retrievers have a lot of hair loss, how the hair is covered, how to care for it, and how to prevent hair loss. 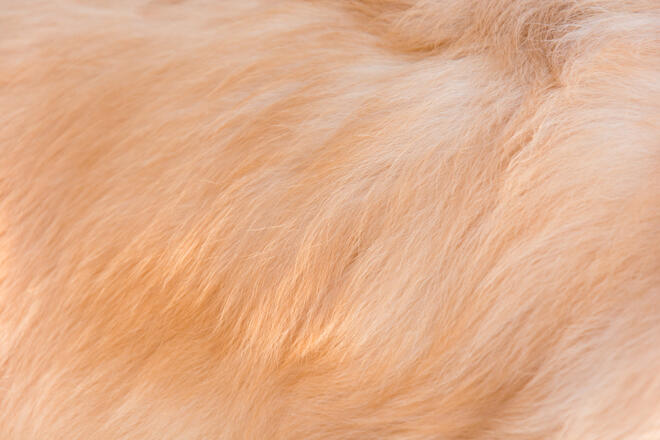 With a gorgeous coat, the Golden Retriever features a large amount of hair and a medium-length, shiny coat. By knowing the type of coat of such a Golden Retriever, you can understand the mechanism of hair loss. 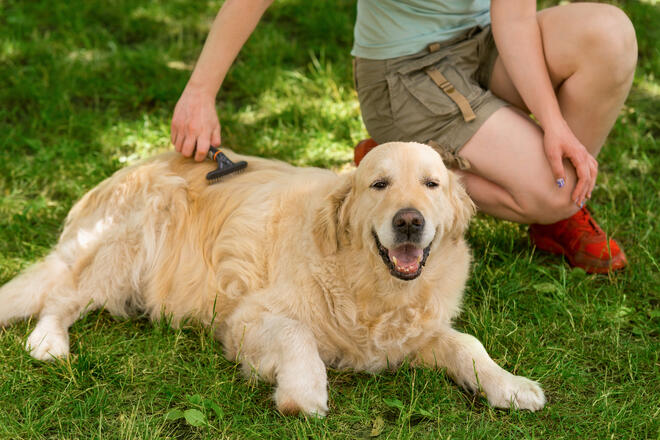 Both American and English Golden Retrievers feature a double coat with a two-layer structure of upper hair (top coat) and lower hair (undercoat). One of the features of the Golden Retriever is that one topcoat and multiple undercoats grow from one hair root. In addition, long feather-like feathers are attached to the neck, back of the legs, lower body, and tail. This ornamental hair plays a role in making the Golden Retriever look more elegant.

Topcoat refers to the glossy gold or cream-colored hair that grows on the outside and is densely populated with water-repellent hair. The water-repellent coat is one of the characteristics of the Golden Retriever, which was born to collect waterfowl as a bird hunting dog.

The undercoat, called the lower coat, is the coat that grows inside the topcoat. It grows softer and denser than the topcoat, prevents the body from getting cold due to cold water, and also causes temperature changes and pests. It has the role of protecting the skin. The characteristic of the undercoat is that its amount changes depending on the season. In the colder months, the undercoat is denser and protects the body from the cold. In addition, the undercoat that is not needed in the hot season will come off, and the minimum required undercoat will protect the skin from temperature changes and pests. 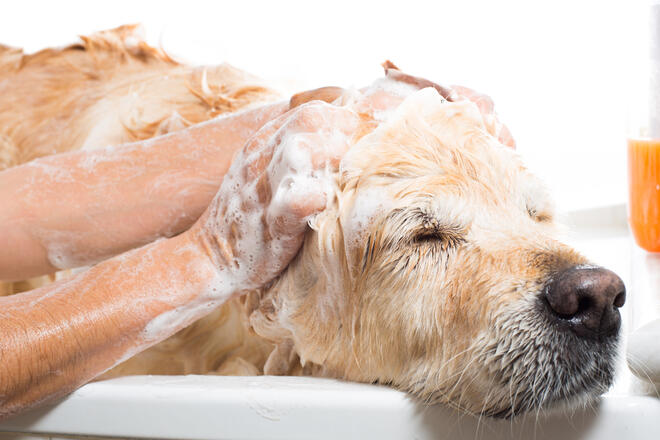 As the name suggests, gold is the mainstream hair color for Golden Retrievers. Recently, the cream color has been increasing in English type, but it is not allowed by AKC. Also, white, extremely dark red, and mahogany are not allowed.

A golden retriever that can be used throughout the year, not just during the molting period. Here are some recommended ways to prevent hair loss from such a Golden Retriever.

Brushing is effective for hair loss

Hair loss can be prevented from splashing into the house with daily brushing. To do this, it is important to get used to brushing since you were a puppy. Brushing time becomes a habit for Golden Retrievers by setting regular brushing time every day, such as after dinner or after returning from a walk. If you don’t like brushing, start by gently brushing, such as when you’re sleeping. 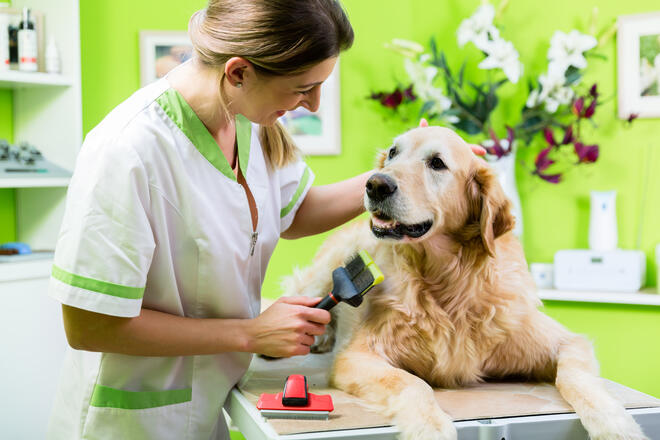 Be careful as pills are likely to form

Golden retriever undercoats are soft and can quickly become pills if not cared for. In particular, rubbed areas such as the back of your ears and armpits tend to become pills, so take good care of them. In addition, you may get pills by wearing clothes as a measure against hair loss. When putting on clothes, it is recommended to choose a design with plenty of room at the base of the limbs.

The Golden Retriever is a breed of dog that has a delicate side. Feeling anxiety or fear such as lack of exercise, long answering machines, or lightning can be stressful. Hair loss may increase when stressed, so creating a stress-free living environment is one of the measures against hair loss.

The Golden Retriever is a breed of dog whose care at home is important. If you neglect to take care of it, your hair may deteriorate and you may develop skin diseases, so take good care of it.

The Golden Retriever’s water-repellent topcoat is characterized by a moderate amount of oil. Golden retrievers who love playing in the water and playing with mud need to shampoo when they get dirty, but if you shampoo frequently, the oil will be removed, and it will become dirty easily, or your skin will become dry and hair loss. May increase. In normal life, it is recommended to shampoo about once a month or when it gets dirty.

Diligent brushing is the point

There are three types of goods recommended for brushing Golden Retrievers: a slicker that is effective for removing hair, a pin brush that has a glossy effect in addition to removing dust, and a comb that is useful for grooming around the face and ears. The point of brushing is to first remove dirt, dust, and hair loss with a pin brush, and then remove fine hair loss with a slicker. Careful brushing with a pin brush before shampoo will help prevent hair loss after shampoo.

The Golden Retriever is a breed of dog that can care for hair (grooming) at home. Basic grooming is daily brushing and regular shampoo, but if you get used to it, you can do it at home, such as cutting unwanted hair around the legs and ears and cutting the shape of the tail.

Grooming is a great place to not only trim the golden retriever’s hair but also to communicate with the owner and the dog. Also, by touching the whole body, you can check the condition of the skin and detect lumps and tumors that are often found in golden retrievers, so it can be said to be very important care for owners living with golden retrievers.

Is it okay for Golden Retrievers to not go to the trimming salon?

Golden retrievers, unlike poodles and schnauzers, are not breeds that require trimming. Basic care such as shampooing and grooming can be done at home, but if you can’t shampoo at home or aren’t good at cutting, we recommend going to a trimming salon.

A recommended menu for Golden Retrievers

Recently, I see many owners ordering summer cuts, but for golden retrievers, summer cuts are rather negative. A cut that cuts off the hair on the whole body makes it easier to get fleas and ticks, including heatstroke. Also, be aware that the hair that grows after that is often stiff, unlike the natural hair, and may not grow as it was originally.

Hair loss is inevitable when living with a Golden Retriever. Many owners have such problems as the hair loss is so great that the vacuum cleaner breaks quickly, and the house is full of hair loss. However, hair loss can be prevented by some measures. Hair loss on the carpet can be easily removed by rubbing it with a wet rag or rubber gloves.

In addition, diligent brushing is one of the measures against hair loss. In addition, a good diet is said to be one way to reduce hair loss. Rather than worrying about a lot of hair loss, we think that hair loss is an inherent part of a Golden Retriever, and it is important to get along well to lead a stress-free life.