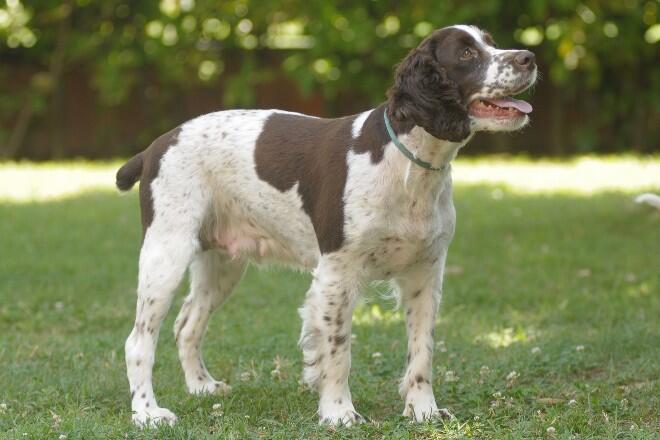 First, I would like to introduce the history of the English Springer Spaniel.

The oldest dog breed of the spaniel breed

The English Springer Spaniel, which is one of the largest spaniel species, has been recognized as a wonderful partner by hunters because it was able to challenge large prey such as hawks without hesitation and accurately collect them. I did.

In the 20th century, it was recognized as an official dog breed in the United Kingdom and became the “Springer Spaniel”, and then moved to Canada and the United States. Nowadays, it is loved by many people, expanding its field of activity not only as a hunting dog but also as a dog show and sports dog. 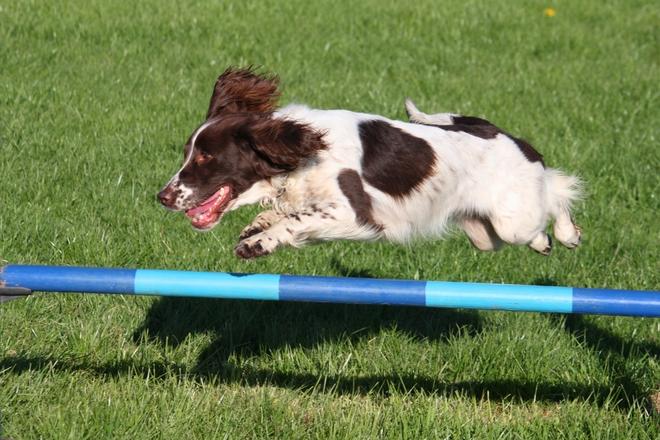 We will touch on the size and body shape of the English Springer Spaniel, and the characteristics of the coat.

The English Springer Spaniel is classified as a medium-sized dog, featuring large drooping ears and a well-supported head with a long neck.

The average height and weight are as follows.

It is slightly longer than its height and has a muscular body. It has the property of stretching its limbs when walking, and its appearance is reputed to be very elegant. The eyes are almond-shaped, and the dark hazel color is the standard, so it is said that the light color of the eyes, which is said to be flying, is not very good. 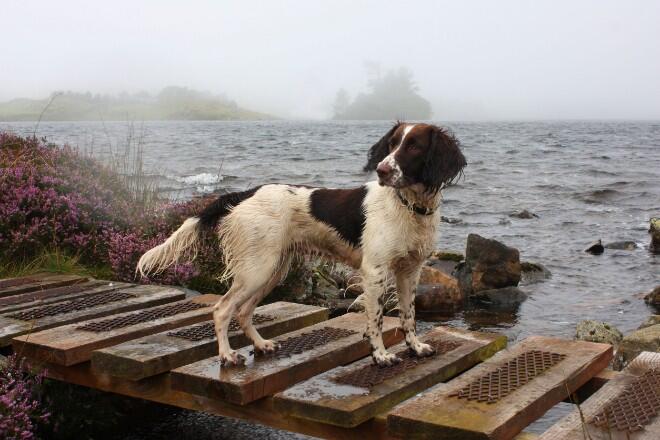 The English Springer Spaniel is certified in three colors:

The coat is double-coated and the upper coat is slightly longer and slightly waved, but rarely some dogs have straight coats without waves. The lower hair is characterized by being short and dense and protects the body from the cold of winter and the thorns of trees in the forest.

The English Springer Spaniel has a lifespan of about 12 to 14 years. This is about the same as the lifespan of a typical medium-sized dog.

The most common illnesses are eye illnesses. This is hereditary and includes progressive retinal detachment, which gradually diminishes vision, and abnormalities in the tendons of the eye, resulting in atrophy of the mucous membranes. By undergoing regular medical examinations, if you detect them early and start treatment early, you may be able to control the progression to some extent or prevent it from getting worse.

Also, although this is also hereditary, the English Springer Spaniel is said to be the most prone to develop Rage Syndrome among many breeds. The symptomatology is that one day he suddenly begins to behave aggressively, and problems such as discipline do not help, and treatment such as medication is required.

Here are two characteristics of the English Springer Spaniel.

English Springer Spaniels have many cheerful personalities and are very obedient to their owners and their families. In addition, he has been active as a hunting dog, and he is very smart and patient, so many children will follow him well in training.

Although it is basically bright and mild-mannered, it also has the property of not being able to treat other dogs and people who meet for the first time in a friendly manner immediately.

One side that is lively and easy to get excited

The English Springer Spaniel is a very active and curious breed of dog. When I was a puppy, many owners were so mischievous that they were unnecessarily annoyed.

In addition, if you get too absorbed in playing, you may get so excited that you can’t see your surroundings. It is important to discipline the owner so that he or she can control it.

How to grow and train English Springer Spaniel

How should the English Springer Spaniel grow? Introducing the breeding environment and discipline.

Environment | You don’t have to be nervous

You don’t have to be too nervous about the English Springer Spaniel breeding environment as it has the ability to adapt to a given environment. Although it is a breed with a lot of activity, it can be bred indoors without any problems.

The English Springer Spaniel requires a certain amount of exercise, so a daily walk is required. Take a walk for at least one hour at a time, twice in the morning and evening. However, that alone may lead to a lack of exercise, so sometimes it is necessary to run as hard as you can with a dog run.

It’s also a curious and clever breed, so it’s a good idea to include head movements in addition to physical movements. It may be good to play like a treasure hunt indoors with your favorite toys.

Discipline | With a sharp and resolute attitude

The English Springer Spaniel is a medium-sized dog, but it is a very strong breed and has the property of being easily excited, so it is necessary to train the owner so that he or she can control it.

It is important to distinguish between discipline and play and to treat them with a consistent and resolute attitude. The English Springer Spaniel is basically a memorable breed, so training will often go smoothly.

The English Springer Spaniel has a double-coated coat and is waved, making it easier for hair loss to get entangled. Therefore, brushing should be done frequently. Also, the inside of long ears that hang down is not well ventilated, so check the inside of your ears regularly to keep them clean. Many dogs get their ears dirty when eating, so using an ear cover is one way to do it.