The English Cocker Spaniel has a gentle and unfussy appearance, but it is actually an active breed with a history as a hunting dog. It is said to be a very rewarding breed because it is affectionate and loyal to its owner, but what about the reality? Here, we will introduce the history of the English Cocker Spaniel, its personality, characteristics, and basic breeding methods. 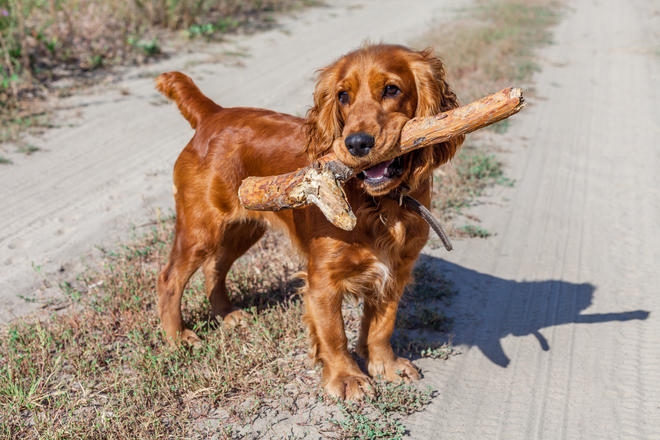 History of the English Cocker Spaniel

The English Cocker Spaniel is classified as a medium-sized dog native to the United Kingdom. Today, the English Cocker Spaniel has a strong image of a domestic dog, but originally it was active as a bird hunting dog that hunts woodcocks and pheasants. It has the role of expelling birds lurking in the bush and collecting the prey shot by hunters and has a long history, and there is a description that it has been active as a hunting dog since the 1300s. There are still many English Cocker Spaniels who work as bird hunting partners, but they look different from the ones kept at home. Let’s follow the history.

“Spaniel”, which is also the breed name of the English Cocker Spaniel, means Spain in Western English, and its ancestors are thought to be related to Spain. Many breeds of dogs are still named spaniels today, but they were originally classified as water spaniels and land spaniels. Both have been active as human companions when hunting, but the water spaniel is responsible for collecting waterfowl, and the land spaniel surprises the birds on land and takes them away, collecting the birds shot down by the gun. There was a role to do. 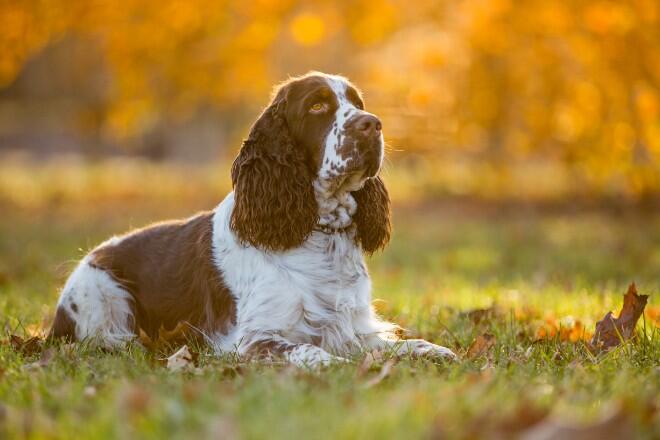 The dog of King Wales in England or

Landspaniel, which is thought to be related to the English Cocker Spaniel, has been working as a bird hunting dog in the Welsh region of England since the 17th century and has come to be called the Cocker because it is mainly a dog that hunts woodcock (cock). It was.

The Land Spaniel raised by King Wales of England is considered to be the ancestor of many “Spaniels”, but there is a theory that the English Cocker Spaniel was born by crossing Brittany Spaniel and Toy Spaniel in France.

The English Cocker Spaniel was originally considered the same breed as the English Springer Spaniel. However, as the role in hunting gradually changed due to the difference in body size, it was registered as another breed at the Kennel Club in the United Kingdom in 1892.

By the way, the English Cocker Spaniel is described as “(The) Cocker Spaniel” in England. Cocker Spaniel, who traveled from England to the United States, evolved into American tastes, but British enthusiasts disagreed and eventually disagreed, and the two breeds were different. It is now registered as.

In countries other than the United States, the term “cocker spaniel” refers to the English cocker spaniel. In Japan, the number of registered Japan Kennel Club (JKC) has gradually increased since around 2015. 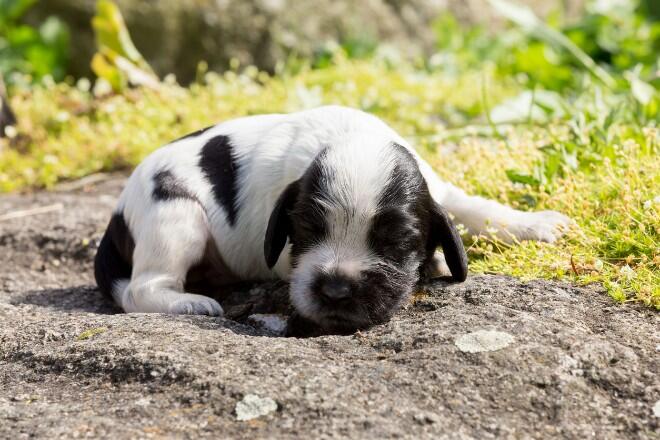 Features, appearance, and size of the English Cocker Spaniel

Next, I would like to introduce the appearance characteristics of the English Cocker Spaniel, such as its physique and coat color.

The standard body weight is 13 to 15 kg and the height is 37 to 42 cm. The English Cocker Spaniel is a very energetic and sporty all-rounder, and because of its high athletic ability, it is a breed that can be expected to rank high if you enjoy dog ​​sports. It also has good coordination that allows you to get along with humans and other dogs, which can be said to be a temperament that remains from the history of being a hunting dog.

The appearance is similar to the English Springer Spaniel and the American Cocker Spaniel, but the charm point is that the eyes are slightly sagging and rounded compared to other spaniel species.

It is difficult to understand because half to the bottom of the body is covered with loosely wavy hair, but it has a solid body with thick bones. It is a body that can be fully used as an endurance hunting dog. It is classified as a small spaniel species. 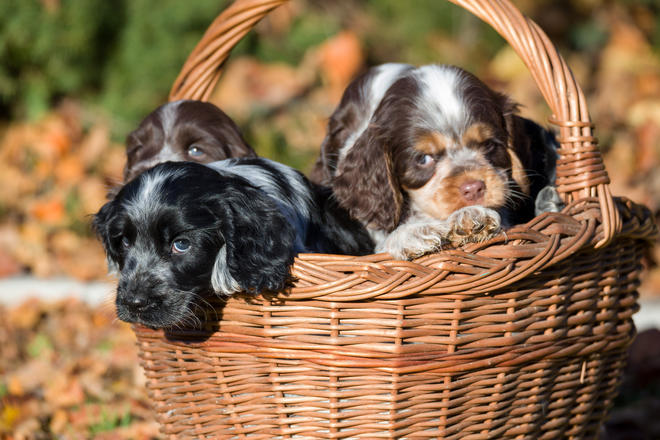 There are so many certified colors for the English Cocker Spaniel. The basic colors are black, red, golden lever, black & tan, liver & tan. Based on this basic color, 2 colors and 3 tri-colors will be added.

The coat has a silky hair quality that fits snugly on the body, and the points are the decorative hair around the legs and abdomen and the wavy ear hair. The wave of the ornamental hair varies depending on the individual, and there are various types such as a gentle wave and a firm curl like a toy poodle.

Since the coat is double-coated, hair loss during the molting period tends to be higher than in other dogs.

Lifespan is about 12 to 15 years. The English Cocker Spaniel is considered to be a breed of dog that is susceptible to hereditary diseases.

The English Cocker Spaniel is said to be a breed of dog that is prone to congenital rage syndrome (Rage Syndrome). This is a brain disease that is not a matter of how to keep or discipline but suddenly becomes aggressive towards humans and other dogs without warning. It is said that the dog is unconscious because he has seizures during the symptoms. No cure has been established, but antiepileptic drugs may help control the symptoms.

Juvenile cataracts are said to have a relatively high probability of developing for English Cocker Spaniels. A cataract is a disease that usually develops as one of the aging phenomena, but it is called a juvenile cataract that develops genetically before the age of two. Suspect juvenile cataracts if your dog often bumps into something even though you are young. Symptoms can be delayed by instillation. If the test determines that it is indicated, surgery can restore vision.

The English Cocker Spaniel is a very attractive breed with a very bright, yet gentle and affectionate personality trait.

In fact, the English Cocker Spaniel has a very bright and lively personality. I’m sociable and I love running around, so if you go to a dog run, you’ll be overjoyed. The innocent personality is also a good playmate for human children. However, due to some delicacy, it may be a little modest except for the owner.

The affectionate English Cocker Spaniel loves to please his owner. The owner happily stroked me when I went to the side, and that was enough to satisfy my heart. Basically, he has a gentle personality, but if you react too much, you may get excited easily, so try to keep the owner calm.

How to grow an English Cocker Spaniel

What is the best way to raise an English Cocker Spaniel? Here are four points you should know.

The English Cocker Spaniel is a breed that is basically kept indoors. Although it has some cold resistance, heating equipment is indispensable for spending winter in Japan. As a breed of dog that loves to move, there are many opportunities to run around in the room. If the room is flooring, there is a risk of slipping due to the hair on the soles of the feet, so it is safe to lay rugs and carpet as much as possible.

The English Cocker Spaniel is a breed that requires a lot of exercises because it has the temperament of a hunting dog. Apart from walking for 30 minutes or more each morning and evening, please create an opportunity to run around freely and exercise, such as a dog run, on holidays. You can run it by playing with a ball, or you can try dog ​​sports such as agility and it will show great ability.

Also, because it has the temperament of a hunting dog, stimulating the brain with nose work using the sense of smell is a movement of the brain. If you secure a sufficient amount of exercise, you can always stay calm, so the ease of discipline will change.

The English Cocker Spaniel is so smart that it makes you a dog who doesn’t hear that its owner knows it’s unreliable. As a result, if you have something you don’t like, you may start to bite and cause problematic behavior, so be careful. The whole family needs to be resolute in discipline.

It’s a dog breed that I like to be praised very much, so it’s a good idea to train while praising it well. It’s good to use snacks, but ideally, you’ll hear what you say with just the instructions.

This time, we have introduced the points for living with the English Cocker Spaniel. An English Cocker Spaniel that combines liveliness and calm. If you can become a reliable leader for your owner, you will be a good and loyal partner. You can also exercise as much as you want in dog sports! You can just lie down together! It’s a breed of dog that can be spent in various ways, so please try to find a way to make each other happy.