The Dachshund is a short-legged, long-bodied hunting dog. The name originated from Germany, and the original meaning was “badger dog”. This species was developed to sniff, hunt, track, and kill badgers and other burrowing animals. Interestingly, although “Dachshund” is a German word, it is not commonly used in Germany. Germans usually call it Dackel or Teckel. It was originally produced in Germany and is now spread all over the world. Dachshunds are relatively easy to raise among all dog breeds. Because the dachshund is independent by nature, it is easy to take care of, and the instructions given by the owner will be quickly understood and followed. 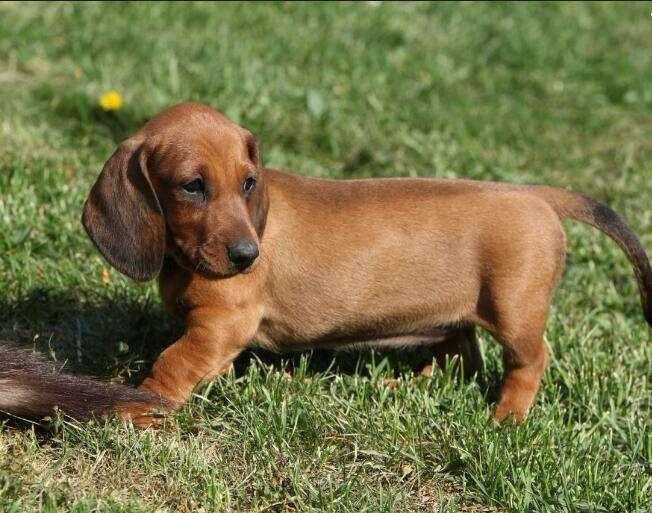 Dachshund, also known as pig badger, is a hunting dog specially used to catch beasts in narrow caves. Because of its short limbs, the whole body is like a dachshund, hence the name Dachshund. The dog was born in Germany, and the Germans also call it Dackel or Teckel, and it has been loved by people since the Middle Ages. In 1840, Germany established the first dachshund club. The Dachshund was short-haired at first, and later breeds of long-haired and wire-haired dogs were developed. Dachshunds were introduced to the UK in 1850. The British began to breed a miniature dachshund for play, which was successful, and in 1935 established the Small Dachshund Club.

The head of a dachshund is long and narrow, with a wedge-shaped skull and a slightly arched head. The depression between the eyes and the nose where the nose and skull meet is very prominent. The ears are moderately long and wide, the roots are close to the back of the head, and the front edges are hanging down to the cheeks, showing a beautiful arc. The eyes are slightly slanted apricot eyes, the color is dark, and the expression is rich. The snout is long and slender, and the nose is large and black.

The jaw is strong and powerful, the lips are closed, and the teeth are in a scissors bite. The forelegs are short when viewed from the front, slightly inclined to the inside. The toes are broad and powerful, growing straight out. The pads on the feet are thick, the nails are firm and dark, the thighs are of appropriate length, and the calves are short, forming a right angle with the thighs.

The hind limbs are upright, and the toes, pads, or nails are roughly the same as the forelimbs. The tail is strong, with thick hair, which tapers toward the tip. The end of the tail is thin and straight, on the extension of the back. 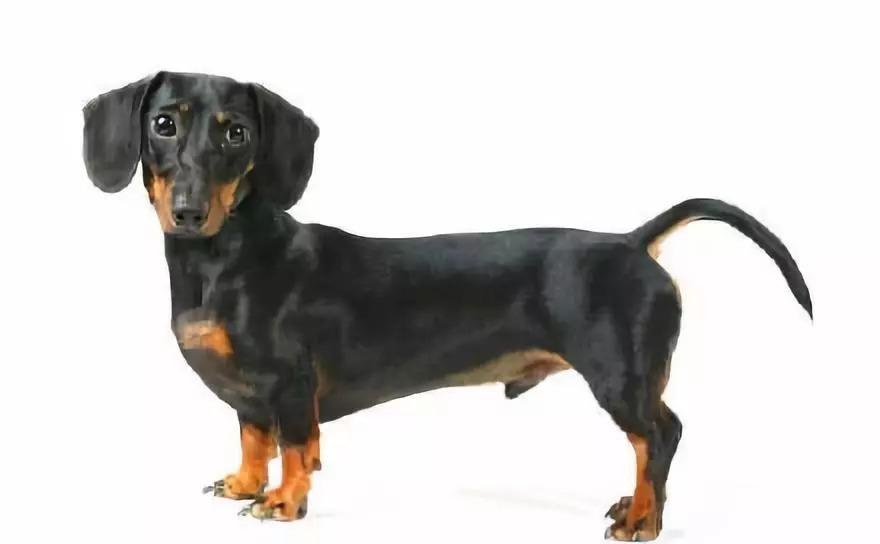 The most striking thing about the Dachshund is its swaying appearance when walking. It is very simple and cute, treats its owner relatively loyally, is alert to strangers, easy to train, and is a natural companion dog, alert but gentle and beautiful. But not proud. Dachshunds are lively, cheerful, brave, cautious, and confident. They often make funny behaviors. They are happy with a dog. Unyielding when working on the ground or underground, all the senses are very developed. Outdoors, the Dachshund is brave, energetic, and tireless; indoors, it is loving and sensitive, friendly when quiet, and hilarious when playing. When the dachshund squints his eyes and sticks out his tongue, it means he is in a good mood.

They also wag their tails vigorously, twist their bodies left and right, and walk lightly to express happiness. When it hums from its nose, it is also a symbol of happiness. When they get close to people, they will raise their tails and swing horizontally, stretch their necks, and trot briskly all the way, their eyes and pupils will shine, they will jump constantly, and their whole body will show uncontrollable happiness. When it spits out its tongue “haha” to act like a baby to its owner, it is also a happy time for it, so you might as well share this happiness with it.

The dachshund has an amazing aura of communicating with people, and it does not hide that it is full of straightforward joy and sadness. Its exquisite facial features and rich body language are full of peculiar expressive abilities. It can let us without complicated conversation. Deeply feel their joy, anger, sorrow, and joy. 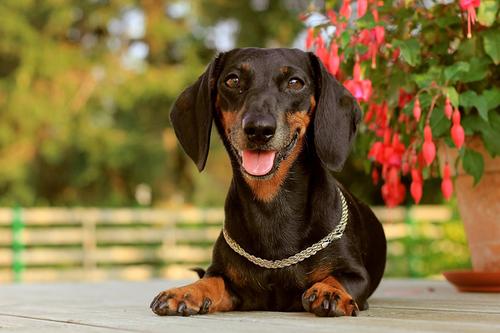 There are 3 types of dachshunds according to their different hairs: short-haired, short and dense, and close to the body; the long-haired type has straight and long hair, with some parts of edge hair; the set-haired type has rough and long hair The same bristles are all over the body. According to the difference in body size, there are two types, the mini type is less than 5kg, and the standard type is 7kg to 14.5kg. Both specifications have the above 3 hair types.

The long-haired dachshund’s back hair is wavy, shiny, and smooth, and its long back hair gives it an elegant appearance. The hair below the neck, chest, under the body, ears, and back of the legs is slender. The hair is the same length throughout the body, with a curly coat, and the tail is gently held on the extension of the spine. The color of the hair is basically the same as that of the short-haired dachshund, except for the length of the hair.

Short-haired Dachshunds have a short coat, smooth and smooth, and brush-shaped tail, which is a natural defect. A small amount of white hair on the chest is normal, usually two colors, not many pure colors. Including wild boar, chocolate, black, gray, camel, and each with little brown markings. Dark short-haired dachshunds are more popular.

In addition to the jaws, eyebrows, and ears, the whole body of the wire-haired dachshund is covered with a uniform tight, short, heavy, rough, and hard outer coat, and the undercoat is short and delicate, softly distributed in the rough hair. The tail is strong, with thick hair, which tapers toward the tip. Hair color: wild boar, black, brown, with varying degrees of red.

Dachshunds should be exercised frequently and should not be fed too much to avoid overweight. The dog’s short limbs make it easy to soil the body when walking, so a towel should be used to wipe off the dirt on the body to keep the coat shiny. Long-haired breeds must pay more attention to the combing of the coat to ensure gorgeous colors. Dachshunds tend to grow tartar on their teeth and should be removed regularly. The spine of this dog is very long, it is not suitable for training to jump, let alone pull it up or let it go up and downstairs with the forelimbs, to avoid spine displacement or other diseases.

It takes more time and energy to raise young long-haired dachshunds, because 8-week-old puppies need to be fed 4 times a day, so someone must take care of them. Adult dachshunds need more careful care.

Regardless of the weather, you need to walk twice a day for at least 20 minutes at a time. They need medical care, hair grooming, and countless caresses. They must not be kept at home all day. So if the owner works all day, he must find a responsible person to take care of it.