The American Foxhound, as its name suggests, originated in the United States. Its front legs are straight and have the correct bone mass. The rubber bones are short and straight. American Foxhound’s feet resemble a fox. The pads are plump and hard. Energetic and attractive physique, it has strong destructive power and is not easy to raise as a companion dog. 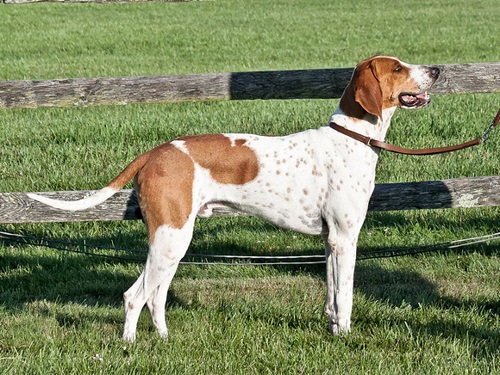 Personality characteristics: The dog is alert and keen, has a keen sense of smell, has a graceful posture, is extremely fast, is gentle and lovely and faithful, and is very brave when hunting.

The main purpose: It can be raised as a hunting dog, the family dog, and catch dog 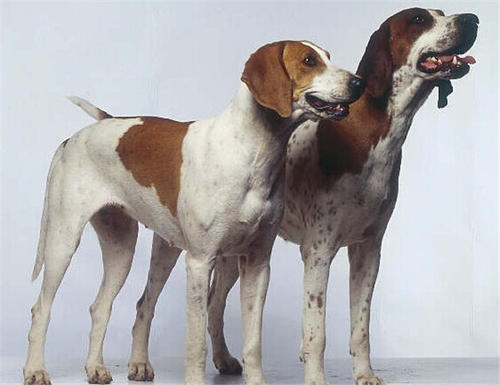 Both the United States and the United Kingdom have Foxhounds, and the American Foxhounds are improved and bred based on the English Foxhounds. Compared with the British Foxhound, the American Foxhound has a slightly slender skeleton and a rougher appearance. It is full of vitality, and approachable, cheerful personality, a unique voice, energy, and strong resistance. It is an excellent hunting dog and an excellent display dog. Around the 13th century, the British used a larger dog to hunt deer. Later, to catch foxes, they began to pay attention to improving their running speed and made corresponding improvements and breeding to become English Foxhounds. Hunting with this dog was once popular in the UK.

American Foxhound types have changed in different regions, but in the 21st century, the American Foxhound Club and Foxhound Owners Association have made great strides in developing more standard types of hounds. 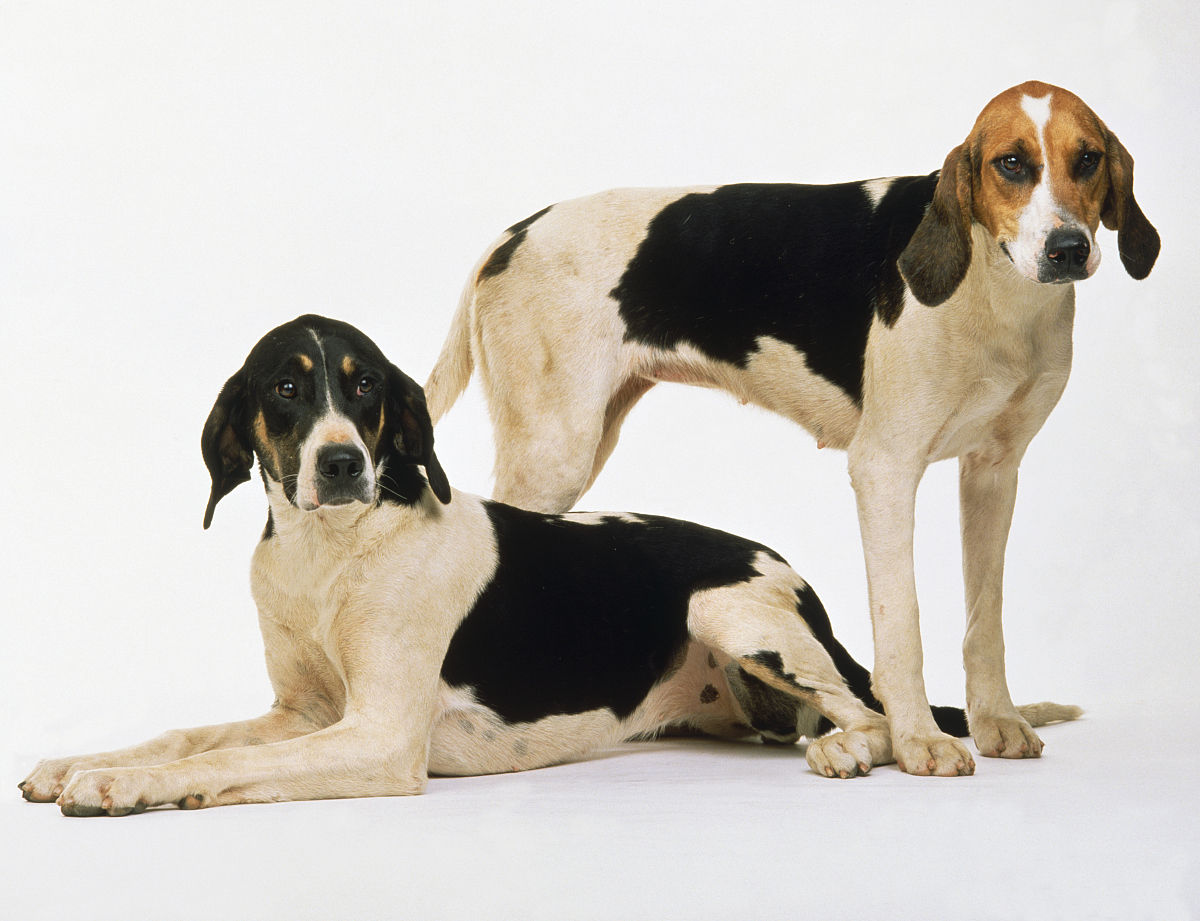 The head of the American Foxhound is long, the occiput is slightly dome-shaped, the ears are moderately low and long, pulled up almost to the tip of the nose, the ears are fine and wide, and almost lack the ability to stand up close to the head. Turn inward to the cheeks, ear tips, round eyes, wide eye distance, brown or light brown, the kiss is quite long, straight, and square, with obvious frontal and nose steps.

The throat is clean and has no skin folds, but a slight wrinkle is allowed under the corners of the mouth. A hound with oblique shoulder blades, a deep chest, and a bust of 71 cm with a height of 58 cm is good. The ribs are expanded, the back length is moderate, the waist is wide and slightly arched, the tail is moderately high, the tail is erect, but not on the back, slightly bent, slightly brushed. The coat is a close-fitting and hard-hound coat of moderate length, and the coat color is any coat color.

Energetic, docile, approachable, and cheerful. But it also has a strong form of resistance and must be strictly trained. It is not suitable for family dogs, especially for urban residents. Energetic and attractive physique, it has strong destructive power and is not easy to raise as a companion dog. Although the breeder has carefully trained the one-week-born puppy, it still gives people a feeling of worry.

According to the well-known authoritative works of American hounds, the first mention of the import of this hound into the United States appears in the diary of an attendant of De Soto. It was further mentioned that this hound was used to chase Indians instead of foxes and hares.

Still from this authoritative book, we learn that in 1650 Robert Brook sailed to the Cape of Good Hope in the United States. His group of hounds followed him. According to this book, these hounds are the direct ancestors of several American hound pedigrees and have stayed there for nearly 300 years. In 1742, Mr. Thomas Walker of Albemarle, Virginia, imported this hound from England; in 1770, George Washington agreed to import hounds from England, and in 1785 he received some sounds from Lafayette like “Moscow Bell “Sound” French Hound. The development of these imported hounds formed the basis of some current Virginian hound pedigrees.

In 1808, the Gloucester Foxhound Club imported some of the “best English Spaniels”, and the Baltimore Hound Club also imported large quantities from the United Kingdom. Roseau was then imported from France and Ireland in 1830. The latter became a direct line of the bloodlines of Harry Birdson and the “Gunner”. In about 1857, General Morbin received a dog named “Tennessee Leader” from eastern Tennessee. This dog was imported from England and became “Mobin”, now called Walker (another famous American hound pedigree). ).

The foxhounds in this country are used for four purposes, and these four purposes are different, so hunting dogs with different characteristics are required.

(1) Field-tracking hounds, race to run in the field-tracking process, the nature of speed, and vigilance are very important.

(2) Hunting foxes with hunters. Need a hound that has a special voice and can track slowly.

(3) To track hounds or sniffing hounds, you need to race or chase sniffing, only considering speed.

(4) Large-scale (it is said that 15-20 or more) hunting in groups. Of course, this species is mainly used by hunting clubs and hunting ranches.

The types of American hounds have changed differently in different regions, but in recent years, the hounds of the American Foxhound Club and Foxhound Owners Association have made great leaps in developing into more standard types. 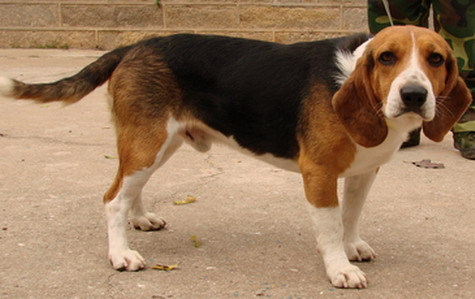 Head: moderate in length, slightly arched at the posterior occiput, with a wide skull and full ears. Ears: The base of the ear is low, long, and wide, close to the head, if you pull forward, it can almost reach the tip of the nose (actually not reach the tip of the nose); the texture is fine and wide, almost completely unable to stand upright, the front ear is slightly inward curly. The position is close to the head, with the front edge slightly bent toward the cheek. The ear tips are round. Eyes: The eyes are large, the two eyes are far apart, the eyes are soft, like the look of the hound, elegant and pleading, and the color is brown or light brown. Muzzle: The length is clear, straight, and square, with the flesh on both sides of the upper lip hanging down to the lower jaw, with a moderate stop.

Very flat head with a narrow top; overly arched; eyes are small, sharp or terrier-like, prominent eyes; the muzzle is long and thin as if suddenly cut under the eyes, or the muzzle is too short. The Roman nose may be turned up to form a plate face. Ears are short, set too high, or tend to be higher than the base of the ear.

The shoulder blades are slanted, neat, and muscular, not overly heavy or anti-shoulder, and can provide flexibility and strength for stretched, ideal movements. The chest has enough depth to provide space for the lungs. From the perspective of depth, it is narrower than the English Foxhound. The 23-inch American Foxhound has a 28-inch bust. The ribs are well expanded and extend back to 3 inches from the waist, which is allowed.

The back is of moderate length, muscular, and strong. The waist is wide and moderately arched.

Defects: Long or wobbly or arched back. Flat, narrow waist.

Forelegs: Straight, with correct bone mass. The rubber bones are short and straight.

Feet: like a fox. The pads are plump and hard. Arched toes. Strong toenails.

Defects: Straight, vertical shoulder blades, out of proportion, or lack of depth. Flat ribs. Eversion of the elbow. The knee joint is tilted forward or backward. The front legs are bent. Feet are long, spread, or spread out.

The buttocks and thighs are strong and muscular, which can produce a great driving force. The knee joint is strong and low. The hock is stable, well-proportioned, and moderately inclined. The feet are compact and firm.

Defects: Cow limbs or hocks are too straight. Lack of muscle and motivation. The feet spread out.

The hair is tight, hard, of medium length. What does not meet the standard is that the hair is short and thin, and the texture is soft.

The American Foxhound is a crossbreed of many British and Continental European dogs. The purpose of the crossbreed is to breed a hound suitable for hunting in the United States. The vast majority of these hounds originated in the south-central and southwestern United States, and many types have been bred to adapt to various hunting environments. In recent years, a large number of American Foxhounds have won very good rankings in beauty contests but compared with other breeds of dogs, their numbers are still small. A large number of working dogs hardly show up in the public, and only those users who are purposeful Know them better.

For the exhibiting dogs, in addition to grooming by the basic rules of grooming, it is particularly important to use a natural temple brush to remove dander from the fur, and then comb it with hound gloves. All uneven or disheveled hair should be cut off.

Foxhounds need more meat nutrients. In the daily feed, the meat should not be less than 200-250 grams, and the amount of other dry vegetables or biscuits is similar to the amount of meat. The meat is cooked and chopped, mixed with vegetarian feed and heated water, and then fed. Don’t feed raw meat, and vegetarian materials should also be cooked. When feeding, it should be fixed at a fixed point and time to develop good eating habits.

The food is usually given for about 15 minutes. When it is out of date, the trough should be moved away to make it aware that it must be eaten within the specified time, otherwise it will starve.

It is best not to re-feed the leftover food from last time, especially in hotter seasons, to avoid feeding spoiled food. To prevent diseases such as enteritis.